What unholy mother of god is this? Why is Google taking in Twitter feeds as part of its Search result?

The announcement made by Twitter was a rude shock to some and to many others, a serious flaw in Google strategy. Or is it? Let me explain the witchcraft behind all this.

Google previously paid to have access to Twitter’s firehose of post. Then the partnership broke down and never was heard from again. This time round, it’s on again with real time feeds being optimized to appear on Google SERPs. Google has a plan but what is it?

Does this mean I need to have Twitter to get a better Search Ranking?

This depends on several factors but you won’t get penalized for not having Twitter. Google is all about finding content and if you don’t have any, no point griping about it.

Is there a reason for having to support a Twitter channel for all my content marketing campaigns?

Having your Twitter Nick isn’t going to help you get a better ranking as the search engine is focused on real time tweets, this means news, events that makes the grade. Having a twitter feed just so you have a better SERP mileage won’t translate well until you know how to place you hashtags where it matters most.

What do you mean by hashtags for SERPs?

Remember trending stories that Twitter often suggest to you? That’s what Google is interested in and not your million of followers or for that matter, your URL post on marketing your wares. Hashtags help to identify trending stories and if you don’t have them. You are pretty much wasted.

So how do I make a difference with Twitter on Google SERPs?

Now you asked the golden question. You can make a difference on two points, first being relevant to the trending events, so hashtags could find your post listed on a Google search. The second is really….you guessed it, video content!

When Twitter bought out Vine, it gained a small footprint for video content. Sure the 6 seconds of fame isn’t going to last you and since it loops. It’s more about capturing the essence of the moment. Hell, it’s a video loop. What value is that? Probably not much but judging from the latest developments, it’s more a parlay of Periscope and a Meerkat.

Two mobile platforms, Meerkat and Periscope, are LIVE streaming apps which at this moment is unsupported in social media except Twitter. Google has a hangout feature to broadcast live but these are often used in teleconferencing and online seminars. It is also very unproductive to live stream events when no one is watching. Content has to be found and what better way to do this than on Twitter.

Content has to be trending issues and this is where you use hashtags. Indexing content using hashtags is nothing new, however if you have a hashtag that is hot…at that very moment it is happening…. guess what? Google has no access to that! 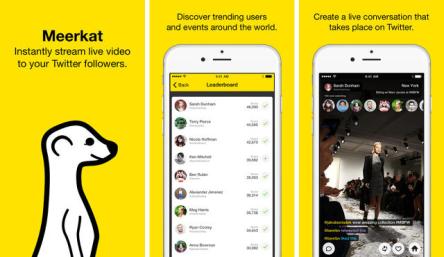 Live streaming from mobile has existed for many years, but it’s integration in social media is kinda fluffy, There are sites like younow, which streams people’s lives to the world. It has been a bit of a hit in Europe and the US but has yet to catch up in the rest of the globe. However with the Meerkat and Periscope platforms on mobile, content can now be streamed via a social platform—which is great for discovering the latest happenings.

With Meerkat and Periscope, you can virtually capture a live feed as it happens on Twitter. The recent bout between the Pacman and Mayweather is a good example on how to skirt moves to block the live fight over the internet. People only had to use this to get a video feed as it happens on TV or at the scene. Great!

So what Google has sneakily done is to add more content to SERPs without any real benefit to someone who has a Twitter account listed on a website. So unless you provide a running video feed of some kind or contribute to a trending hashtag would Google be interested in what you are showing.

China based Meike wants a shot at your iPhone

It has become apparent these days that all people want is to add on lenses to iPhones. Why iPhones? Why not Android devices? The problem lies with perception. iPhones are premium items. Meaning people who buy them are either rich or have plenty of extra cash to double down on a seemingly average spec device. […]

Is Rufus the Future of Wearables?

The mobile device is expected to do more and this isn’t coming on wearables so far, so please welcome the Rufus Cuff….

When it comes to receiving calls, even on Skype or BBM, you’d need to have to talk to your phone, which apparently isn’t the best way to communicate when out and about with the noise. Ambient noise or sounds will interfere with your speech and this is probably one reason people turn to Bluetooth hands […]

There are truck loads of cameras to use with your mobile. For those who like to live stream, there is Periscope and GoPro 4, which allows you to show a POV scene or your talking head. But things are going to change if you have a two person set up when Movi or Mevo camera […]

If you are thinking of buying a Watch for your mobile device, then you better read this first to know the truth.

Gamer, writer, technologist, photographer and philosopher all rolled into one. Benard is an award winning content development specialist who loves cold weather environments and hanging out with strange forest creatures.